How to Microwave Corn on the Cob in the Husk 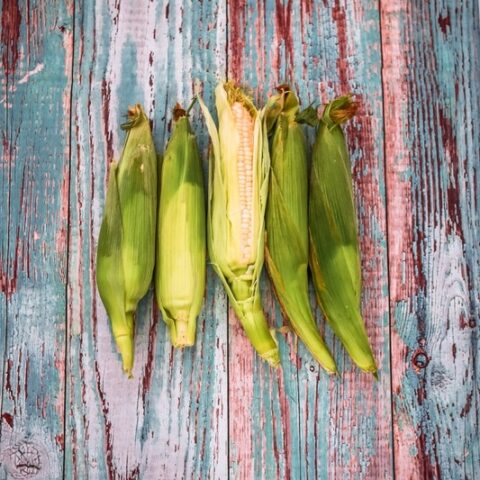 *This post may contain affiliate links. Please see my disclosure to learn more.

The microwave has proven to be convenient for cooking, so there must be a way to microwave corn on the cob in the husk. After all, boiling a pot of water just to cook a single ear of corn seems to be a bit wasteful.

How do you microwave corn on the cob in the husk? Soak the husked corn cob in a water, then place it on a microwave safe plate and nuke for 4 minutes. Remove the corn from the microwave and use a sharp knife to cut off the bottom of the husk. Grab the top of the husk and slide it off to expose the cooked corn on the cob.

Not only is it an efficient use of time and energy, but microwaving corn on the cob also tastes great. When boiled, a large amount of the corn flavor is diluted and washed away in the water, a steamer is hard to setup properly and not everyone has access to a grill.

This article details how to microwave corn on the cob in the husk. Additionally, it provides helpful tips and things you should be aware of along the way to avert risks of danger.

Is it safe to microwave corn on the cob in the husk?

Yes, it is possible to safely microwave corn on the cob with the husk in place. However, it has to be done carefully as there is a potential risk of fire damage if the husk is too dried out.

Some prefer cooking corn with the husk and cob as it adds a layer of protection to the tender kernels, and also enhances the overall taste with a more “corny” flavor. Let us see how husked corn can be done in the microwave.

Be careful so that you avoid burning the husks, which could end up leading to a kitchen fire if the fibers ignite. Otherwise, the corn could be burnt beyond redemption and the whole thing will be spoiled.

To reduce the risk, soak the corn on the cob and the husk in water. This will add extra moisture that will help the cooking process and minimize the flammability.

Do not shuck the corn to begin with, as this will remove the outer layer that naturally protects the tender corn while exposed to high heat. Microwave the corn for about four minutes, or until it is fully cooked.

Once the corn is cooked, slice off the bottom, and slowly remove the husk off by slipping it off the top. The corn will have cooked quite well as the husk traps steams which quickly and evenly cooks the corn on the cob.

However, it is easy to overcook the corn. If the husk is extra dry, then soaking it in water helps to avoid the risk of catching fire.

You could further prevent this by covering the entire corn, including the husk, with a wet paper towel. This will prevent burning and scorching of the husk because of the heat generated by the microwave oven.

How long do you microwave corn on the cob in the husk?

To be fully cooked, microwave corn on the cob inside the husk for about 4 minutes. The corn will be tender and slight crisp as you bite into each kernel.

However, make sure that you do not overcook or undercook it for obvious reasons. It usually takes between three to five minutes for the ear of corn to cook in the microwave, depending on a few factors of course.

The size of the corn, number of ears and the microwave wattage are all important things to keep in mind. Normally, the corn should take around four minutes to complete.

Additionally, it will take a bit longer if you are planning to boil the cob in the microwave. However, dry cooking in the microwave is always a better option because it retains the original flavor, taste and goodness in terms of nutrients and antioxidants.

In case you are unsure about how long to microwave, you could set the timer to 2 minutes and check for doneness, then add 1 minute increments until the corn is fully cooked.

Once you become familiar with how corn on the cob inside the husk cooks in the microwave, then you will have more confidence moving forward.

How do you know when corn on the cob in the husk is done in the microwave?

Making corn ready in a microwave is a delicate task. The risk of undercooking and overcooking is always there for the first few times.

It becomes even more complicated when you the husk is involved as you are not able to see the cooking process to visually inspect the cooking progress.

However, here are a few tips that could help you determine if the corn is done cooking in the microwave.

The cooking window in a microwave for corn with the husk in place is between 3 to 5 minutes. When the corn is nearing completion, you can find a few tell-tale signs.

The corn will become deep yellow in color, the kernels will swell, increase in size and become tender when you touch them. You can use a spoon or a knife to prod the kernels and if it sinks into the flesh then you can be sure that it is cooked well.

Tips to microwave corn on the cob in the husk

Other cooking methods use sources of direct heat, while the microwave cooks from the inside. The electromagnetic energy excites water molecules that use friction to generate heat.

Heat is easily generated when corn on the cob is microwaved, and efficiently targets the kernels, especially when it is inside the husk.

Here is the best way to microwave corn on the cob in the husk:

There is no doubt that it is possible to microwave corn on the cob in the husk, though not many people are comfortable doing it. They should know how to go about it in a safe manner by following the proven methods of microwaving corn with the husk.

Can You Microwave Corn On The Cob To Make Popcorn?
← Previous
How to Reheat Corn on the Cob in Microwave
Next →
Click here to cancel reply.

Hello! My name is Joshua. I am a formally trained professional chef with great recipes, ideas and strategies. This website is full of easy and practical tips on defrosting, cooking, melting, reheating, or just about anything else you could do with a microwave. Articles are written by food experts, chefs, home cooks, and me.

So glad to see you sticking around!

Want to be the first one to receive the new stuff?

Enter your email address below and we'll send you the goodies straight to your inbox.

Thank You For Subscribing

This means the world to us!

Spamming is not included! Pinky promise.